Seimei Shrine in Kyoto became world famous thanks to the movie “Onmyoji” and Yuzuru Hanyu of figure skating.  Actually, this is a shrine famous for “naming” in my hometown of Kyoto. I and my son (two men) also got their names at “Seimei Shrine”.

I sometimes remember about this shrine and visit this spot.  I visited Seimei Shrine recently, so I would like to introduce about the mysterious stories about Seimei Shrine. 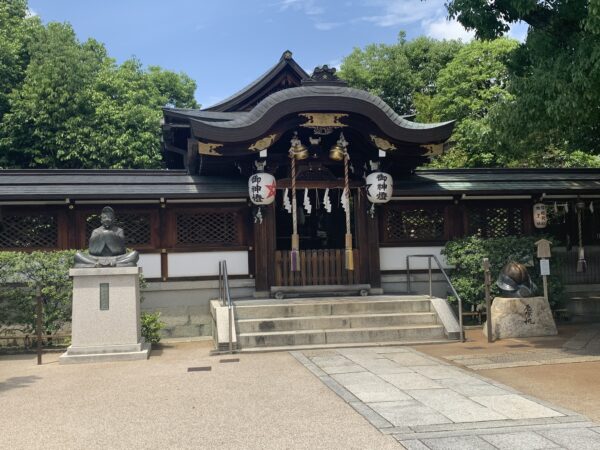 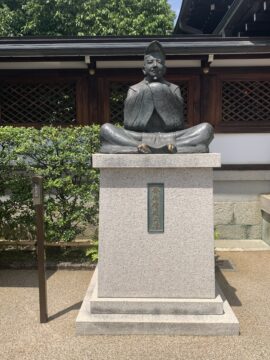 Peach of magic and evil 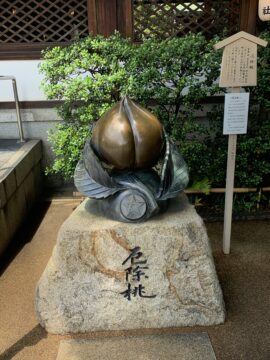 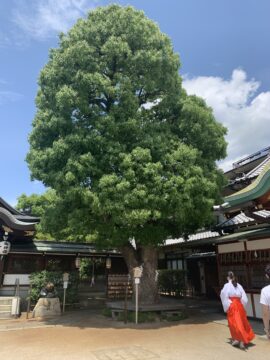 Seimei Shrine held a ceremonial ritual every year in Autumn equinox day, and many people come to see this event every year.  However the ceremony was not held in public because of COVID, and there weren’t many people in the shrine even though it was a great holiday. 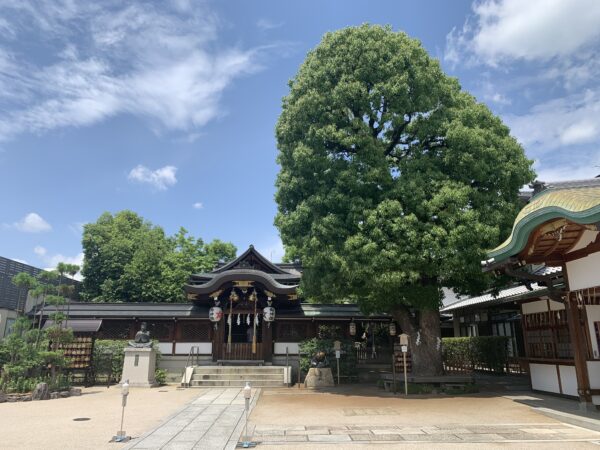 Seimei Shrine is a place to worship Abeno Seimei who is a famous onmyouji in middle of heian period.  And this shrine is located in the place that used to be a house of Abeno Seimei. 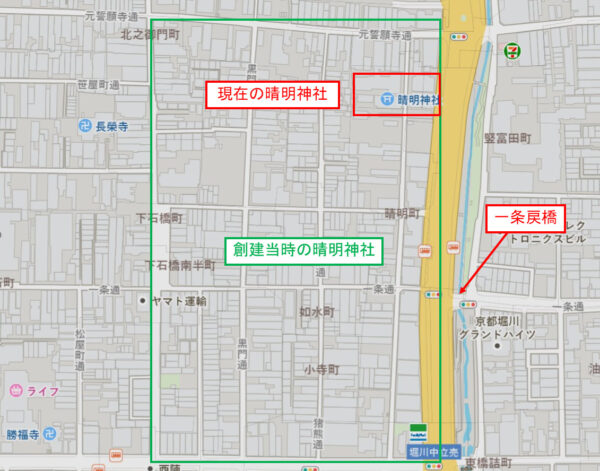 Abeno Seimei worked for six emperors as a close position since emperor Suzaku to emperor Ichijo. In his life time, he went to Chinese dynasty called Tang and learned “Yin-Yang Wu-Xing”, and he spreaded the usage of Yin yang wide in Japan.

Abeno Seimei had a mysterious power of “Ying-Yang”.  The lists of his power is placed with illustration at the Seimei Shrine. 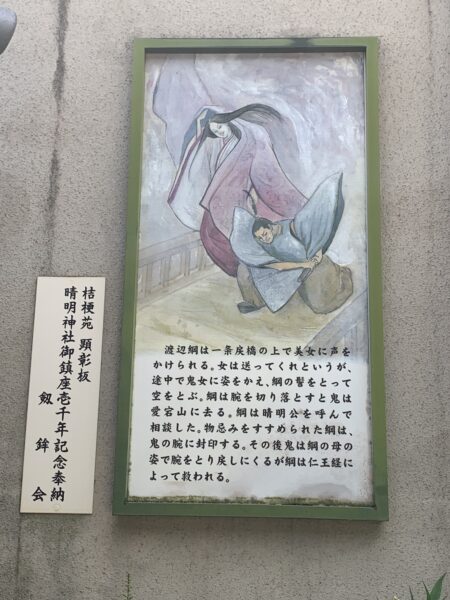 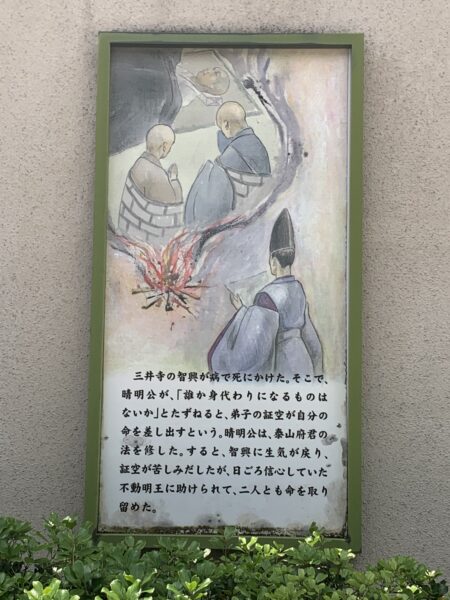 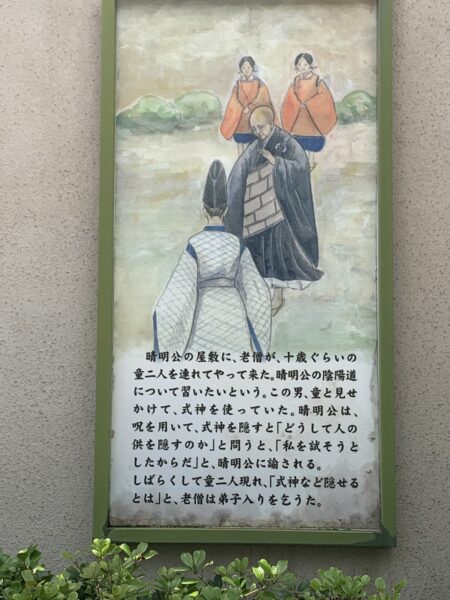 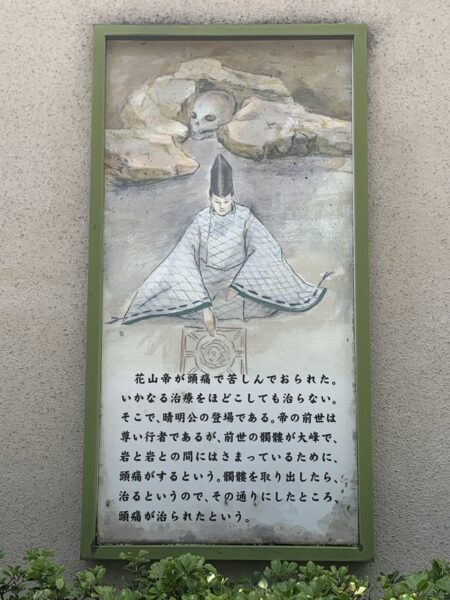 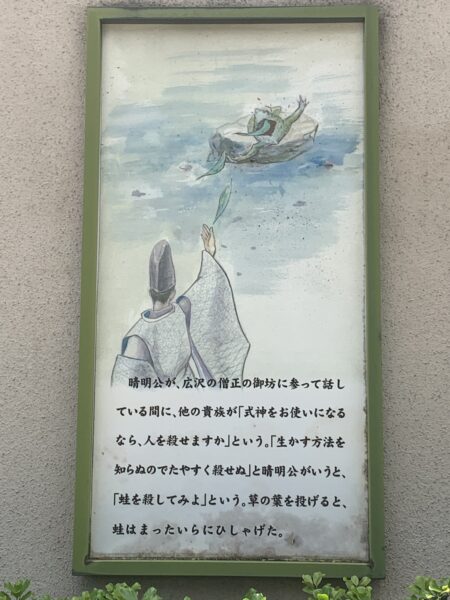 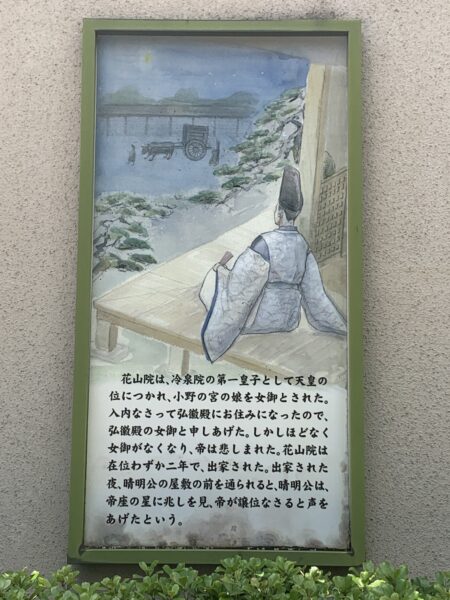 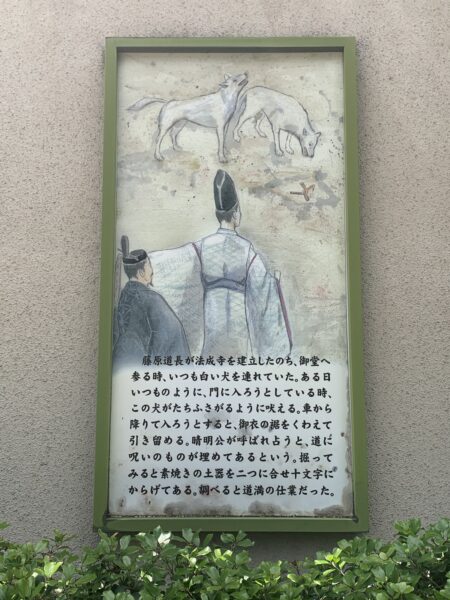 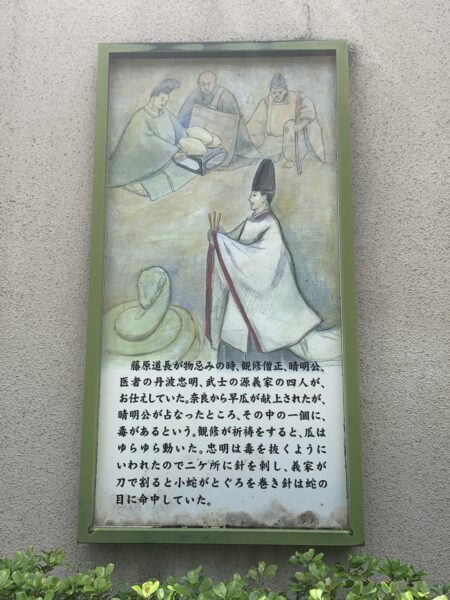 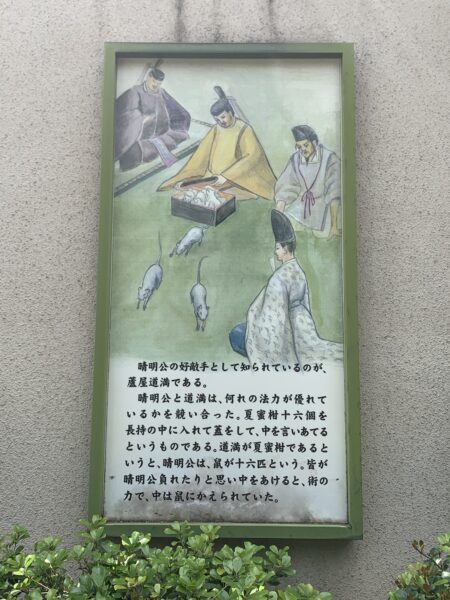 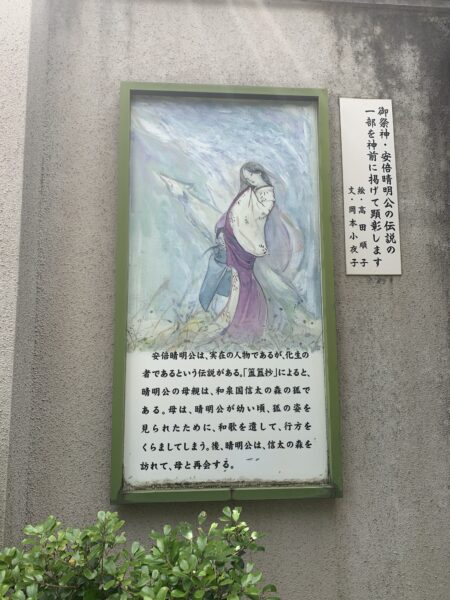 “Yin-Yang Wu-Xing” is a idea of natural philosophy which was born in China, and this idea is to describe every existence in space with five elements. 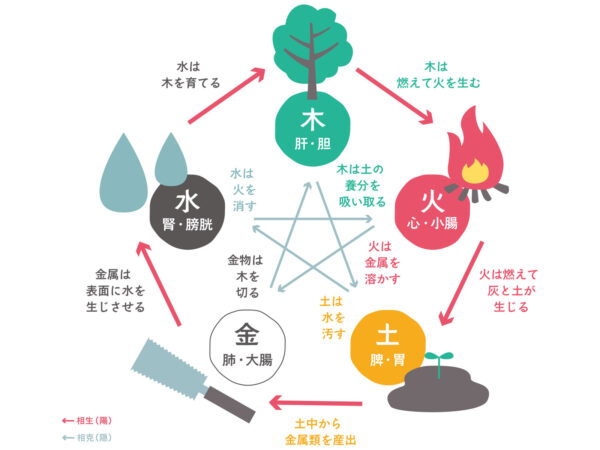 Seimei Shirne’s symbol is based on this star shape from the picture of Yin-Yang Wu-Xing called “Five Pointed Star” or “Pentagram” and the paper with this mark has an effect to give a curse to avoid any evils.

Pentagram is known as a symbol of spell and it is commonly used to protect from something.
And the mark which makes Five Pointed Star upside down is called devil star which symbolizes devil, and this mark is said that this is a one of the sign of secret organization; freemason. 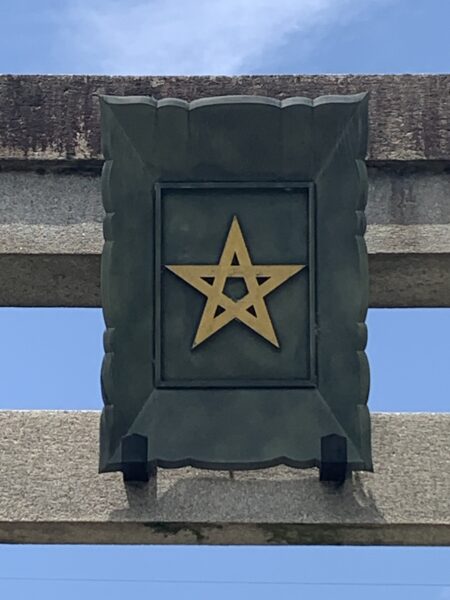 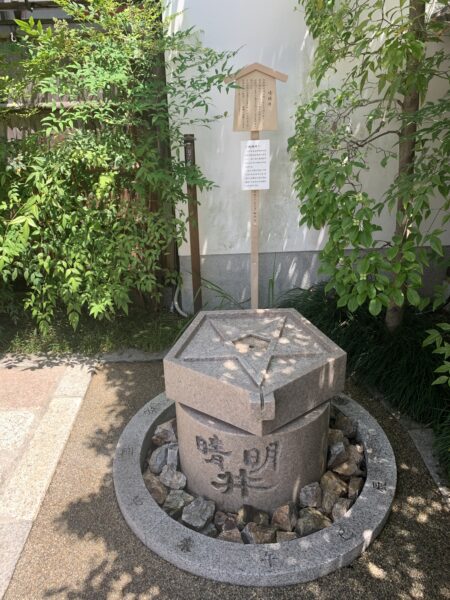 Onmyodo is idea of fortune-telling developed by Abeno Seimei in Japan with his original idea.  And Onmyodo was taught by national organization to a very important person.

A person who learned Onmyodo extreamly well is called “Onmyoji” and “Onmyoji” was given a special status from emperor in the middle of Heian period.

Onmyōji (Japanese: 陰陽師, literally: yin-and-yang master) was one of the official positions belonging to the Bureau of Onmyō [ja] of the Ministry of the Center under the ritsuryō system in ancient Japan, and was assigned as a technical officer in charge of oriental divination and geomorphology based on the theory of the yin-and-yang five phases. In the middle ages and early modern period, the term was used to refer to those who performed Prayers and divination in the private sector, and some of them were regarded as a kind of clergy. 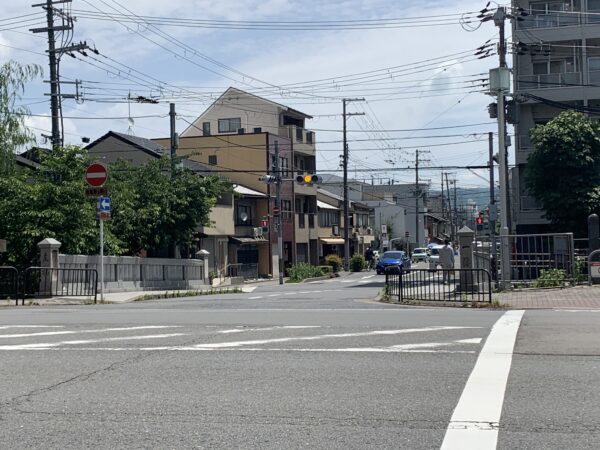 Miniature of Ichijomodoribashi in shirne 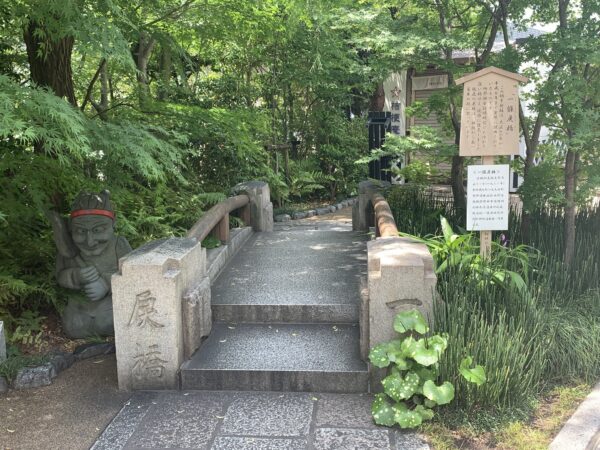 There is a statue of Shikigami at the next of miniature of the bridge.

“Shikigami” is a sprit which Onmyoji can tunnel and people can not see this spirit.  It is said that the spirit was sealed under the bridge and person who cross this bridge could get a fortune-telling when Abeno Seimei was alive. 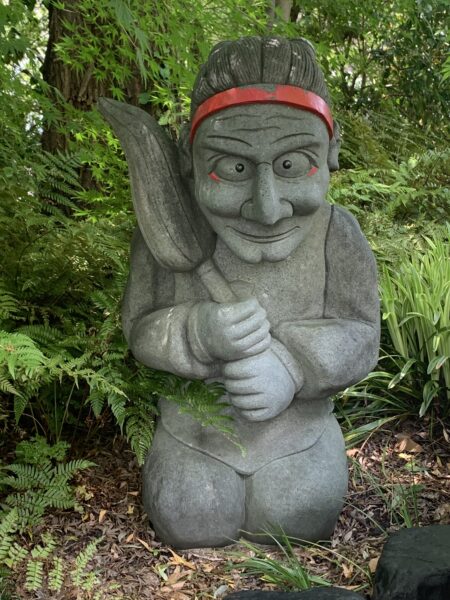 Abeno Seimei sealed Shikigami under the birdge, because Abeno Seimei’s wife was scared of Shikigami.
Abeno Seemei was not an onmyoji but could she see the Shikigami…?

I’m not sure about that, but it makes me feel a little creepy when I saw this statue at the night time.

“Hashihime” was worshiped at the big temple as a guardian of protecting from invading enemy.  “Hashihime” which appears in “The Tale of Heike” indicates Ichijo-modoribashi.

The writing about legend of Hashihime in Ichijo-modoribashi can be seen at Seimei Shrine.

The sword “Kamikiri” which cut off demon’s arm in “The Tale of Heike” is treasure of Mianoto family.  And since the event of the tale, the name of the sword was changed to “Onimaru”.

“Kamikiri” has lots of name with some tales.  For examples, it has a name “Child of the Leo” because the sword cried every night like a lion or it also has a name “Ally Cutter” because it has a tale that the “Kamikiri Sword” cut off the sword which name was “Kotori” until the “Kotori” becomes as long as “Kamikiri”.

Minamoto had been losing battles after changing the name of the Minamoto’s sword.  The name of the sword was eventually backed to “Kamikiri”.

There used to be a shrine of Abeno Seimei in the grounds of the most famous tea master “Senno Rikyu”. 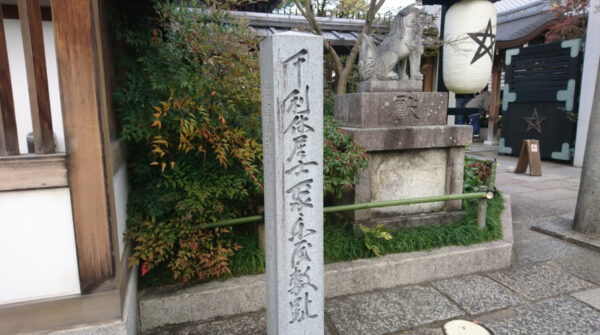 Because Sennorikyu and Seimei Shrine has a connection, there are lots of famous place about teas near the Seimei Shrine such as Daitokuji and Kyoto’s top three tea maker family.