When I stepped out of the house, it was fine today. It’s a waste to be in the house!

Just because my eldest son was on holiday, I drove with my wife and three people in search of nature without deciding where to go.

Sakura flowers have begun to fall, so there is no cherry blossom viewing. While talking, I crossed the mountains toward Shiga prefecture.
The view of “Lake Biwa” that I saw on the way is superb!

The weather is nice and the color of the water in Lake Biwa is different from usual. So I decided to go to “Otsu”.

I was surprised that “Otsu Port” was beautifully maintained for the first time in a while. The surrounding area is a spacious park. A person eating a lunch box on the lawn and a mother playing with a small child while watching the pleasure boats passing by. Each person was spending his time as he wanted.

A tree like a symbol in the middle of the square. There are columns on both sides of the north-south passage. Two columnar monuments reminiscent of a tall “monolith” between Lake Biwa and the plaza. It is a playful design.

The stairs around the square have a circular shape, and it seems that they can be used as chairs for events. 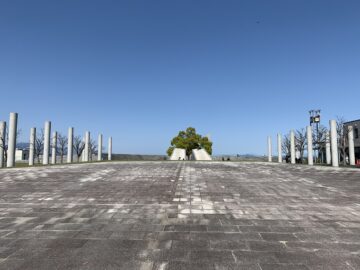 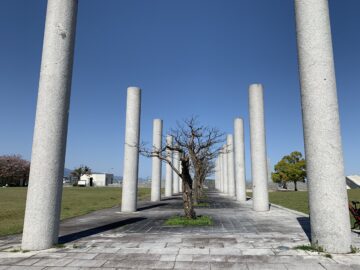 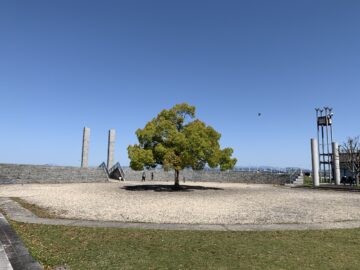 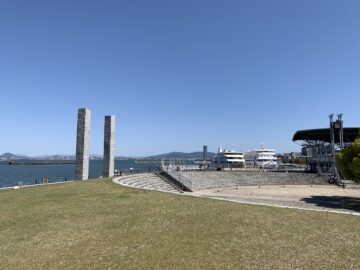 And on the north side of the square is a membership yacht harbor.
Owning a yacht is a “dream”, isn’t it? 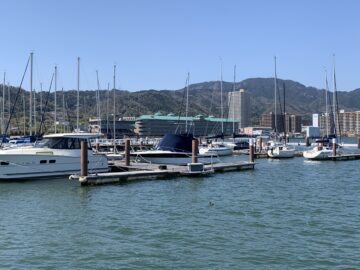 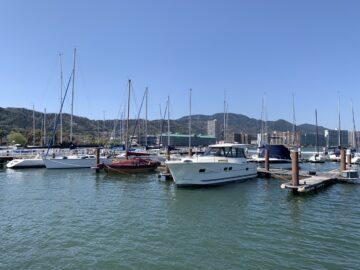 “Nagisa Park” is 4.8km from Otsu Port to Otsu Prince Hotel along the shore, and there are parking lots and toilets in some places. Everyone is free to enjoy walking, jogging, fishing, etc. here.

I remember coming to black bass and bluegill when I was little.

You can see the pleasure boat from Nagisa Park. 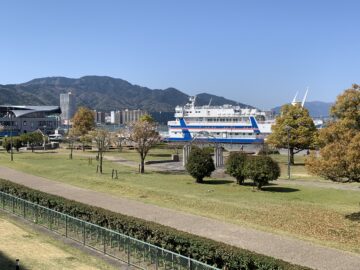 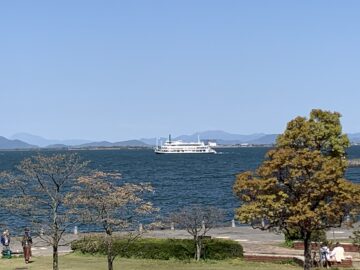 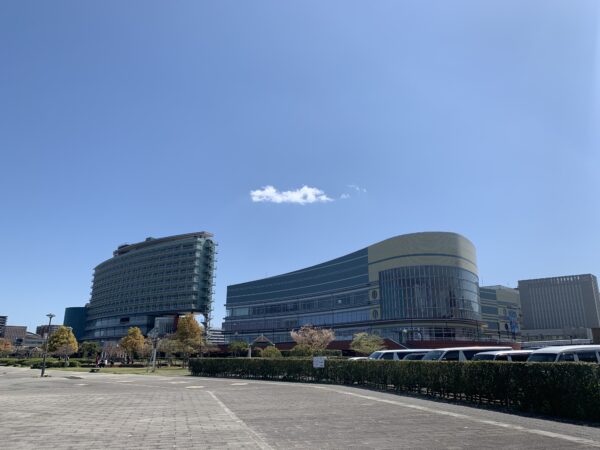 A buffet is good at the Otsu Hotel, and you can also dine at the amusement facility next door.
It’s a great place to escape if the weather changes suddenly.

There was such a thing nearby! It’s the first time to see a wild duck so close. I’m surprised at the size! 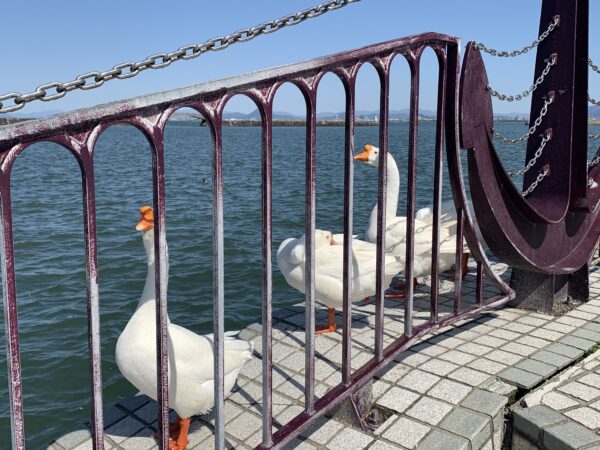 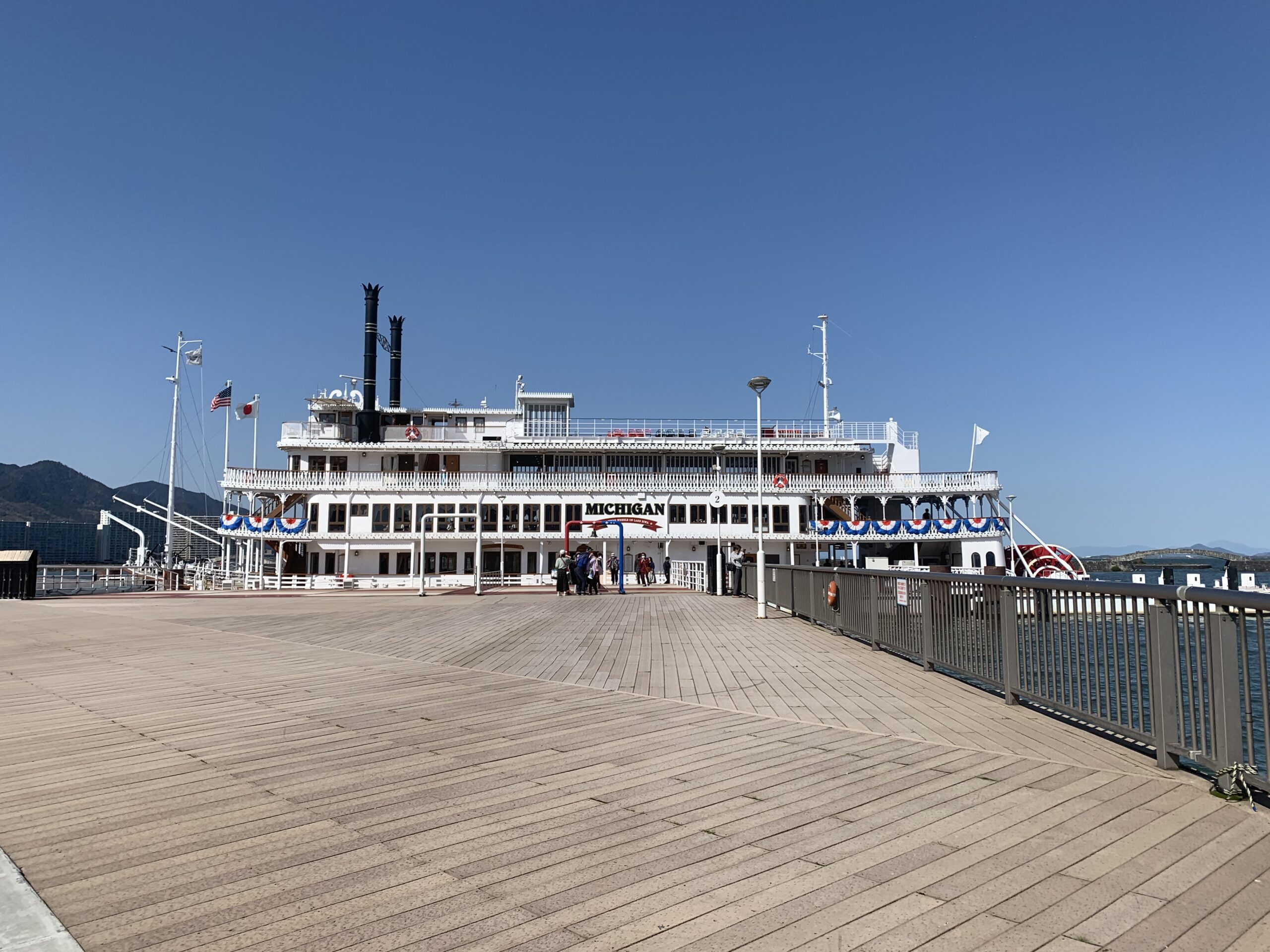 “Michigan” has been in operation since 1982. The only ship of the same type is the “Mark Twain” from Tokyo Disneyland.

The design reminiscent of the United States as a “paddle steamer” is valuable. 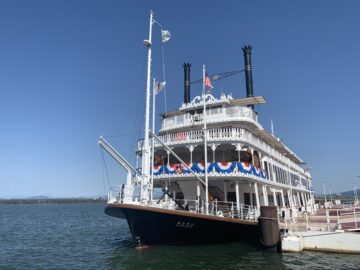 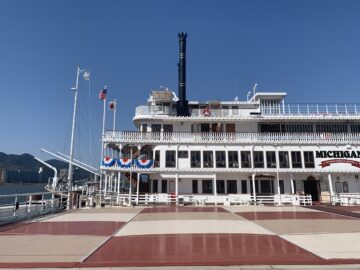 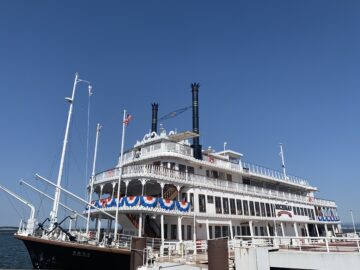 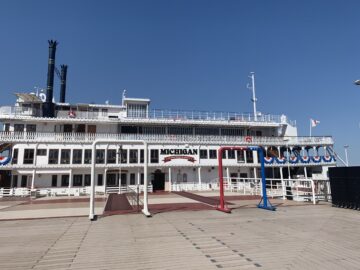 Meal on “Michigan” with a 360-degree view from the lake. You can enjoy an elegant time.

Also, I would like to board the ship if I have the opportunity.