Imamiya Shrine, located in Kita Ward (Nishijin), Kyoto City, is known to have been revived by Keishoin Temple (also known as Otama), which is the origin of the word ‘Tamanokoshi’. It is also a shrine where the Yasurai Festival, which is registered as an Important Intangible Folk Cultural Property, is held.

The Otorii on the south approach to Imamiya Shrine was damaged by a typhoon in October 2017 and was removed for a long time, but after five years it was rebuilt. 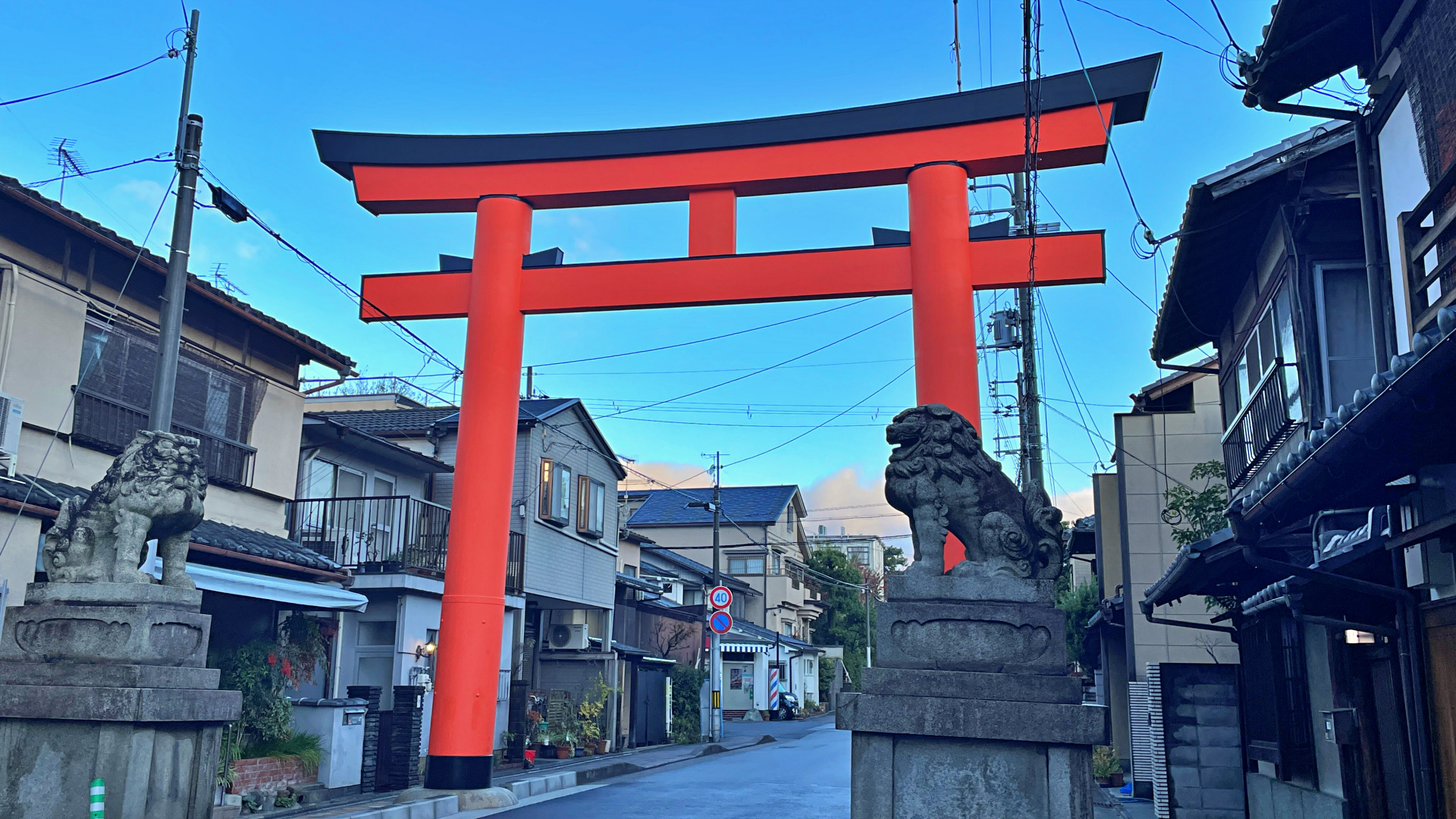 This torii is built on the historically important approach (passage) leading to Funaokayama. And since it has been built on this site for nearly 100 years, it has been loved by the locals as the entrance to Imamiya Shrine, which is the symbol of the guardian deity of Nishijin, and has longed for its early reconstruction.

The notice board posted in the precincts of Imamiya Shrine expresses the chief priest’s passion for rebuilding the Otorii. 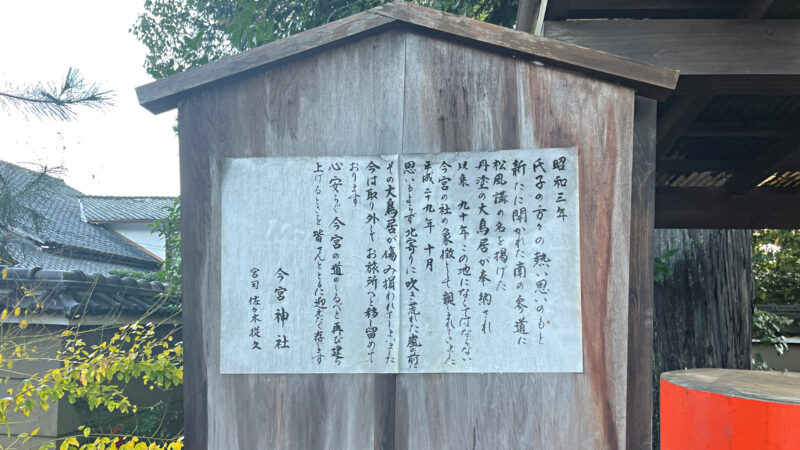 Damage caused by the typhoon in October 2017

The beginning of the matter is the damage caused by the typhoon, and the details are as follows.

Due to Typhoon No. 21 in 2017, which caused extensive damage in Kyoto Prefecture, the torii tilted to the south. Judging that it would be dangerous to leave the shrine as it is, an emergency measure was taken to support it with braces from the south side. 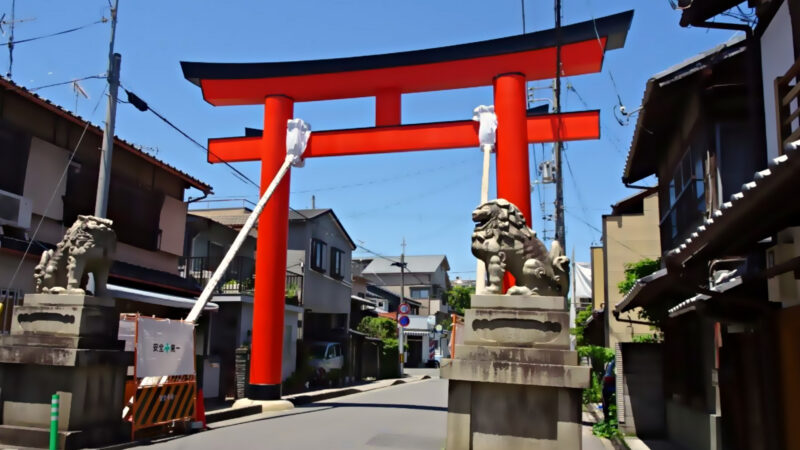 In the following year (2018), the renovation plan was accelerated due to the approach of a series of large typhoons, etc., and in August of the same year, the torii disappeared after the dismantling and removal work was carried out.

Although it is called dismantling, it is said that it took 10 days to carefully dismantle it because it was a work that had to be dismantled one by one for the purpose of reconstruction.

The dismantled torii is stored in the Otabisho (Kitaoji Shin-Omiya to the south), and the pedestal is left and a copper plate roof is attached for the time being. 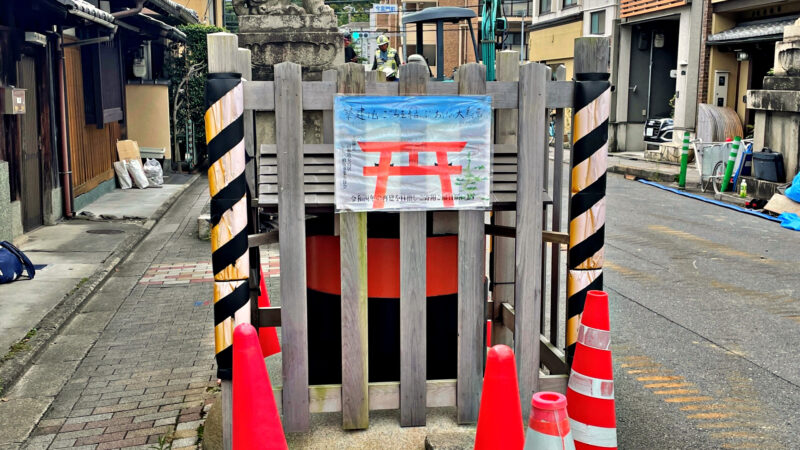 At the eastern end of the middle of the Imamiya Shrine precincts, the damaged torii pillars are placed. The pillars that have stood the test of time for nearly 100 years are thick enough to be hard to find today, and the parts that were above the ground are so sturdy that they can still be used.

The photo below was taken in November 2022, and it looks like the buried part is rotten, but there was no such damage immediately after dismantling. 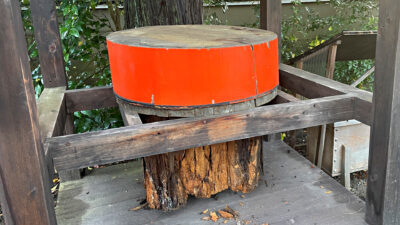 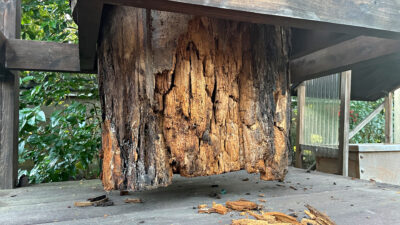 The Otorii restoration work took about seven months from September 5, 2020 (start of construction) to November 19, 2020 (completion). Construction to build a large-scale torii was carried out over two days, October 24th and 25th.

According to the contractor, there were many severe conditions, such as the dense concentration of water pipes and gas pipes underground, and the high-voltage lines running through the air.

Construction of the torii gate (October 24)

The chief priest of Imamiya Shrine was there for most of the day, probably out of joy and concern about the construction of the long-awaited torii gate. The torii gate is assembled under the watchful eye of many people, including the owner of a nearby barber shop, the owner of a coffee shop, and local residents.

Since the base of the column was damaged, about 1/4 of the entire length was replaced with a steel frame and the base plate was welded. It seems that the weight is about 3 tons, and a 50-ton wrecker was used for construction. 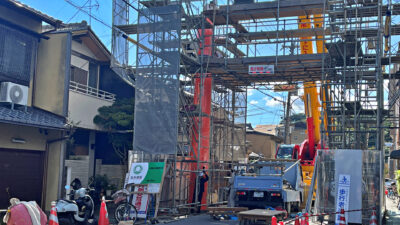 Next, the nuki lifted up by the wrecker is placed on top of the scaffolding, and the chain block is used to finely adjust the height while manually inserting it into the tenon of the pillar. We have to make room for the western pillars, so we have to do some back-and-forth.

There is a private house right next to it, and there are high voltage lines in the air, so the work is hard.
If you build two pillars, you won’t be able to pass “nuki”, so build one pillar first. 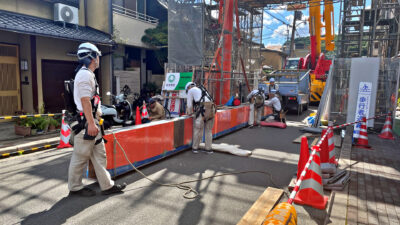 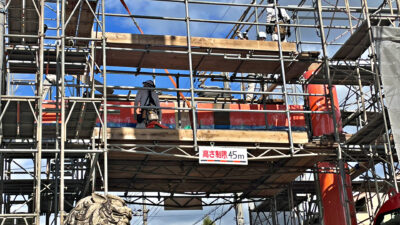 Build two pillars and pass the “nuki” through the pillars. It seems that today’s work will be finished once the “gakuzuka” and “wedge” are lifted. 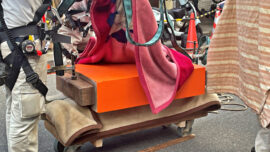 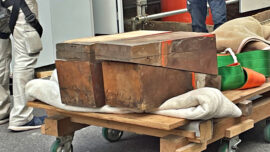 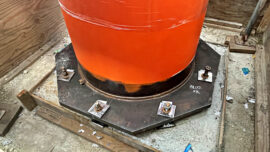 Construction of the torii gate (October 25)

Today is a continuation of yesterday’s work to set the Shimagi and Kasagi, but it seems difficult because there are a lot of overhead wires. It seems that the weight of the Kasagi is about 2 tons, and today they will set a 25-ton wrecker on the north side of the torii in consideration of the overhead wire. 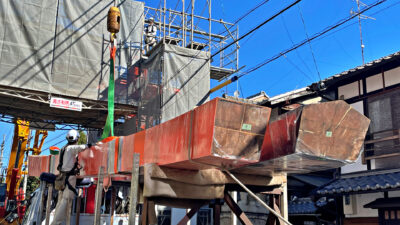 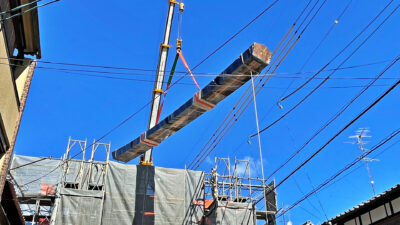 The moment Kasagi got on, the people who were watching “applauded”. It’s an emotional moment.

Before I knew it, the chief priest was nearby, so when I called out to him, “The torii that the neighbors have been waiting for has been completed,” he said, “I appreciate everyone’s feelings.”

The biggest event is now over.

Dismantling of scaffolding and installation of Kamebara

On November 4th, the dismantling of the scaffolding began, and the covering sheet was removed, and the entire Otorii can be seen clearly. 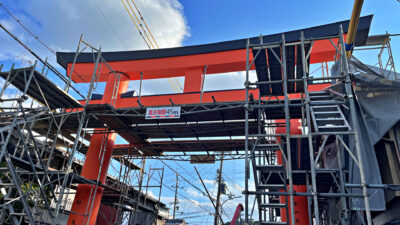 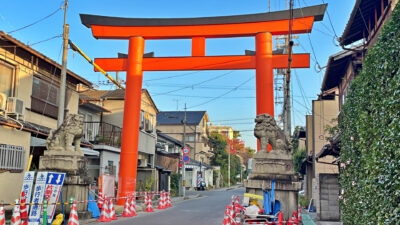 The Kamebara on the base of the pillar and the stone underneath are from the time of construction. 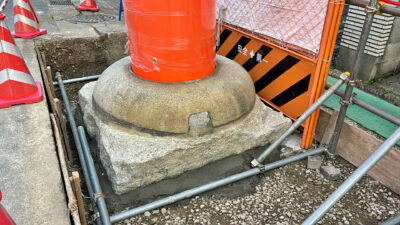 Reconstruction of Otorii on November 19, 2022

Around the Otorii, road construction (water supply and drainage) is being carried out by Kyoto City, but on November 19th, the “Imamiya Shrine Otorii” was rebuilt.

What is a torii in a shrine in the first place? A torii gate is a barrier that separates the world of gods and humans, and the entrance to the realm of gods is called a torii. However, it seems that it is unknown why it is called a torii, and even scholars have not come to a conclusion.

【The etymology of torii, what is said to be the origin】

The style of torii can be broadly classified into ‘Shinmei torii’ and ‘Myojin torii’.

Below are the names of each part of the torii (Myojin torii) of Imamiya Shrine. 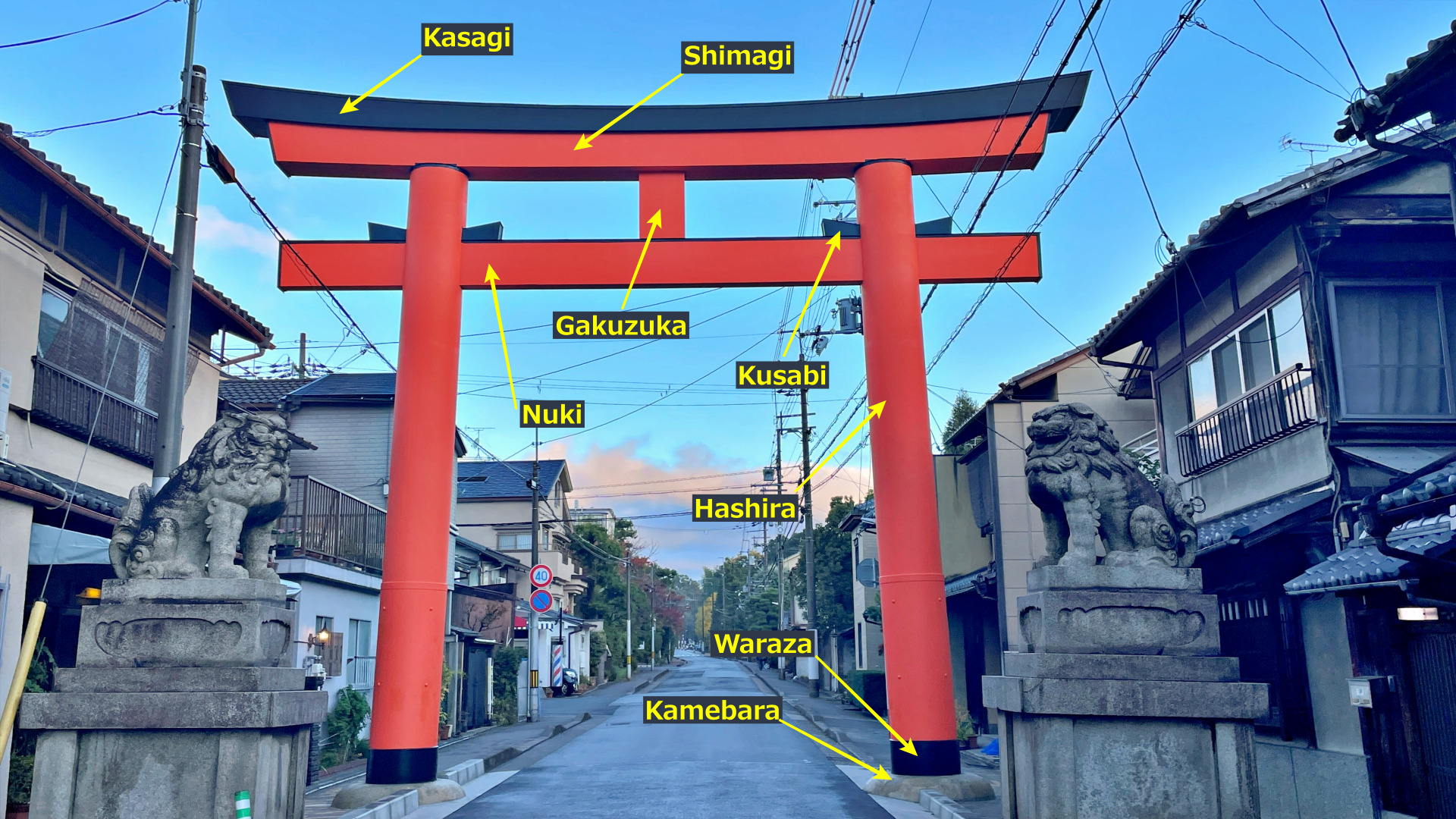 Why is the torii vermilion?

The familiar vermillion color of torii gates is called ninuri in the language of building decoration. “Tan”, which is the material of tannuri, is a lead oxide made by adding sulfur and saltpeter to lead and baking it. The main component is trilead tetroxide, which is called “entan” or “koumyotan” in the Japanese construction industry. (* Due to its strong toxicity, it has been removed from the new Japanese JIS standards.)

Traditional shrines and temples have been painted red not only for their visual meaning of warding off evil and representing divinity, but also because tanen had the role of protecting the structure from decay and pests.

The traditional “Ninuri” applied to shrines and temples requires skilled craftsmanship to achieve a uniform finish.

The Otorii gate, which was rebuilt with the passion of Imamiya Shrine and parishioners, reused the materials donated in 1928, except for the heavily damaged pillar bases. Unlike at the time of its foundation, the construction work was completed in a place with heavy traffic and buried pipes and high-voltage power lines nearby.

I have heard comments from the locals such as “I’m glad it was completed” and “I feel calmer when there is a torii”, and I feel that things that should have been there have returned.

Looking at the torii structure from an architectural point of view, I think that it was possible to reconstruct it because of the traditional craftsmanship that tried to reproduce the state at the time of its foundation. There must have been various hardships that cannot be seen on site, but I strongly feel that such traditional techniques must be handed down to the next generation.