On the east approach to Imamiya Shrine, there are two shops called “Ichiwa” and “Kazariya” that sell aburi mochi. Aburi mochi is said to ward off evil, and is said to be Japan’s oldest confectionery that has inherited the traditional flavor from the Heian period.

Higashi-sando in the early morning when the autumn leaves are at their peak. “Ichiwa” is on the right, and “Kazariya” is on the left. 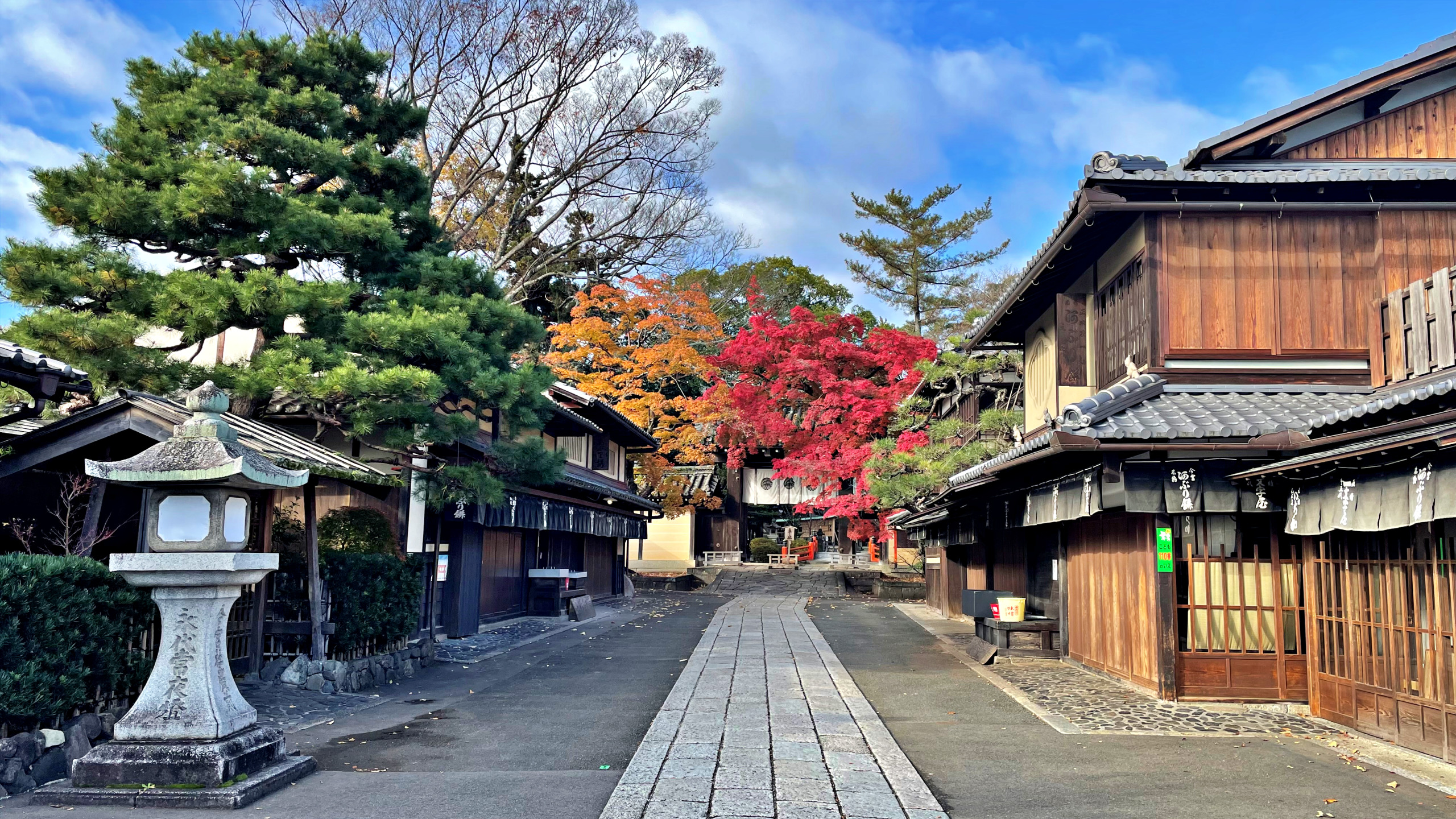 Early in the morning, there are few people who come to worship, and the atmosphere is calm, but after noon, the number of worshipers increases and a line forms in front of the aburi mochi shop. 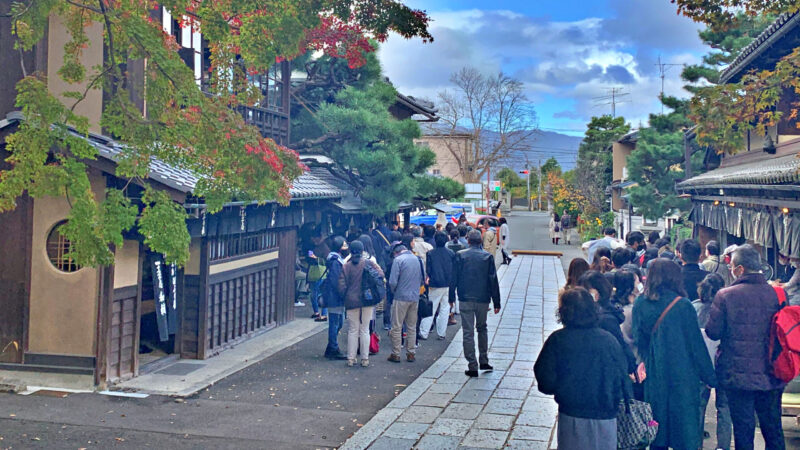 Aburi-mochi is a thumb-sized mochi coated with kinako (roasted soybean flour), skewered on a bamboo stick, and grilled over charcoal. And it is a mochi sweet that you can dip it in a white miso-based sauce unique to Kyoto.

Aburimochi is eaten under the eaves of a historic townhouse while feeling the fragrant flavor of roasted soybean flour. It is also a place for worshipers to socialize and reminds us of the good old days of Japan.

When I live in Kyoto, I am often asked by my friends and acquaintances who come from far away to give me sightseeing information about Kyoto, and I guide them to unknown sights unique to Kyoto people. Among them, this place that seems to be Kyoto is recommended. 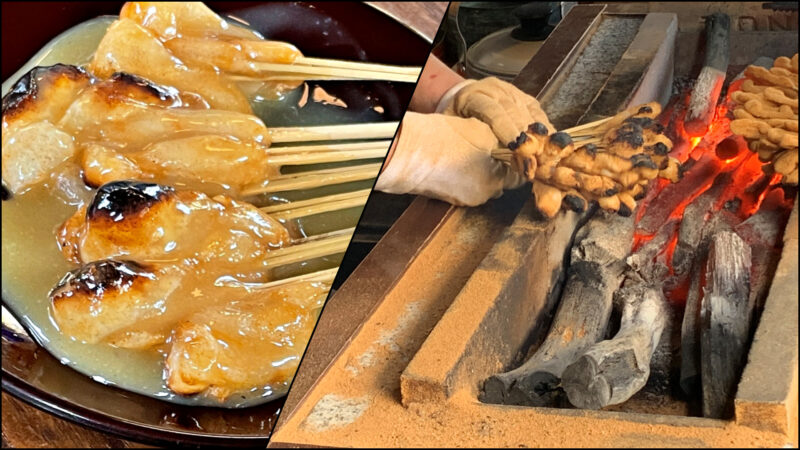 Aburi-mochi has a surprisingly long history, and it is said that it began when Ichiwa’s first generation, Ichimonji Wasuke, dedicated Okachin, a specialty of Koryu-ji Temple, to Imamiya Shrine.

Imamiya Shrine and “Aburi Mochi”, a sweet that wards amulet

Imamiya Shrine is said to have been founded in 1001 when the Murasakino Goryokai was held to appease the plague and enshrine the mikoshi from Funaokayama to Imamiya Shrine.

The founding of Imamiya Shrine and the founding of Aburi-mochi (Ichiwa) are almost the same, and the bamboo skewers used for Aburi-mochi at that time were igushi, which were dedicated to the shrine. This is the reason why it is called amulet sweets.

Speaking of warding off evil at Imamiya Shrine, there is the earliest festival in Kyoto called “Yasurai Festival” held on the second Sunday of April every year.

One of Kyoto’s three unique festivals, the “Yasurai Festival” has been held since the founding of Imamiya Shrine to appease the plague. It is said that if you go inside the hanagasa decorated with cherry blossoms and camellias, which are carried around at festivals, you will be able to spend a year in good health. 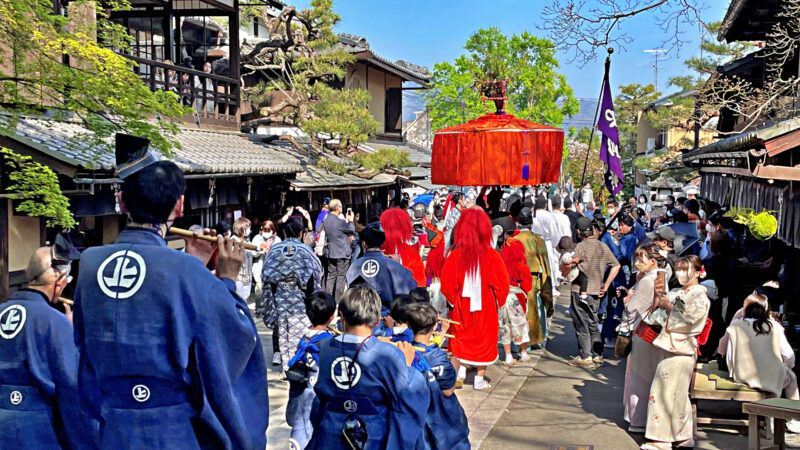 The difference in the taste of “Aburi mochi” facing each other

“Aburi mochi” is a traditional sweet that has been handed down from ancient times without a recipe, and the simple taste that makes full use of the ingredients varies slightly depending on the season and weather. That’s the good thing about handmade, so if you’re interested, one way to enjoy it is to try and compare them. 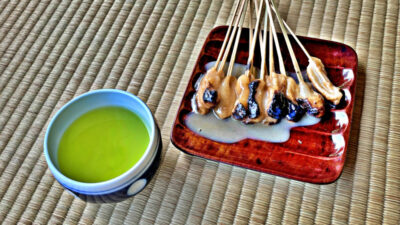 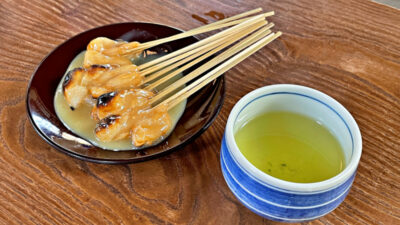 Ichiwa’s shop has been designated as an important landscape building in Kyoto City as “a building that is important for the formation of the landscape along the pilgrimage route leading to the east gate of Imamiya Shrine.”

The store is made up of multiple buildings, and the old building is said to be from the Genroku era, while the new building is from the Taisho era.

In the center of the store, there is a large well with a diameter of 3m, which is said to have been built in the Heian period.

This well is still in use today, and you can ask the store staff to show it to you. 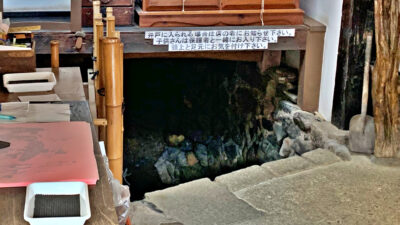 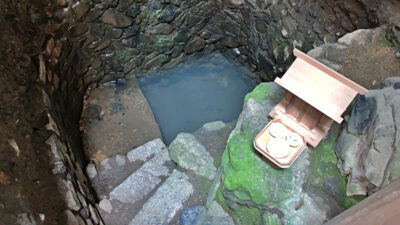 “Kazariya” has been in business for nearly 400 years, and you can feel the history in its appearance.

This is the entrance of a relatively new shop, and as soon as you enter inside, there is “Suikinkutsu”. 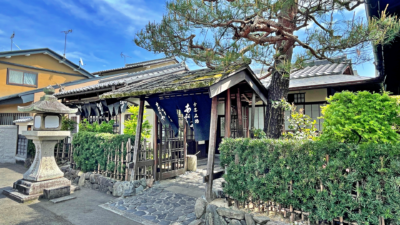 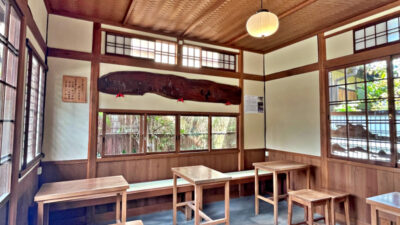 Benten-sama is enshrined in this suikinkutsu. When you pour water on Benten with a ladle, you can hear the beautiful sound of a biwa played by Benten. 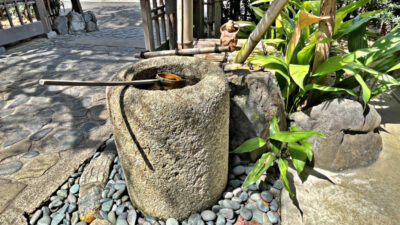 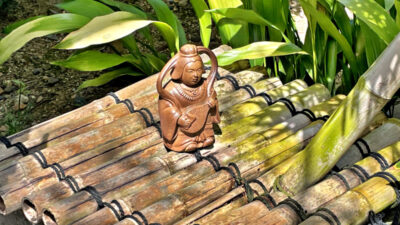 In the vicinity of Imamiya Shrine there are Daitokuji Temple, Funaokayama where Nishijin built a fort during the Onin War, and there are many historically important places such as Kenkun Shrine where Oda Nobunaga is enshrined on the east side of the mountain.

Also, the area around Imamiya Shrine is a filming location that is indispensable for period dramas, so if you are lucky, you might be able to meet your favorite actor.